The Making of the Single Barrel Pencil

The Making of The Single Barrel

In October 2018, our chairman Henry Hulan had the opportunity to speak to Johnny and Andy at the Erasable Podcast about Musgrave Pencil Company.

The conversation spanned a variety of topics, and among them was using vintage slats for a modern pencil. This was where the idea for the Single Barrel Pencil went from something that had been just in Henry’s head into an idea out in the open.

Of course, it’s one thing to talk about because so many people love vintage pencils. But it’s another to bring it to life. Could we make a new pencil from vintage Tennessee Red Cedar slats?! 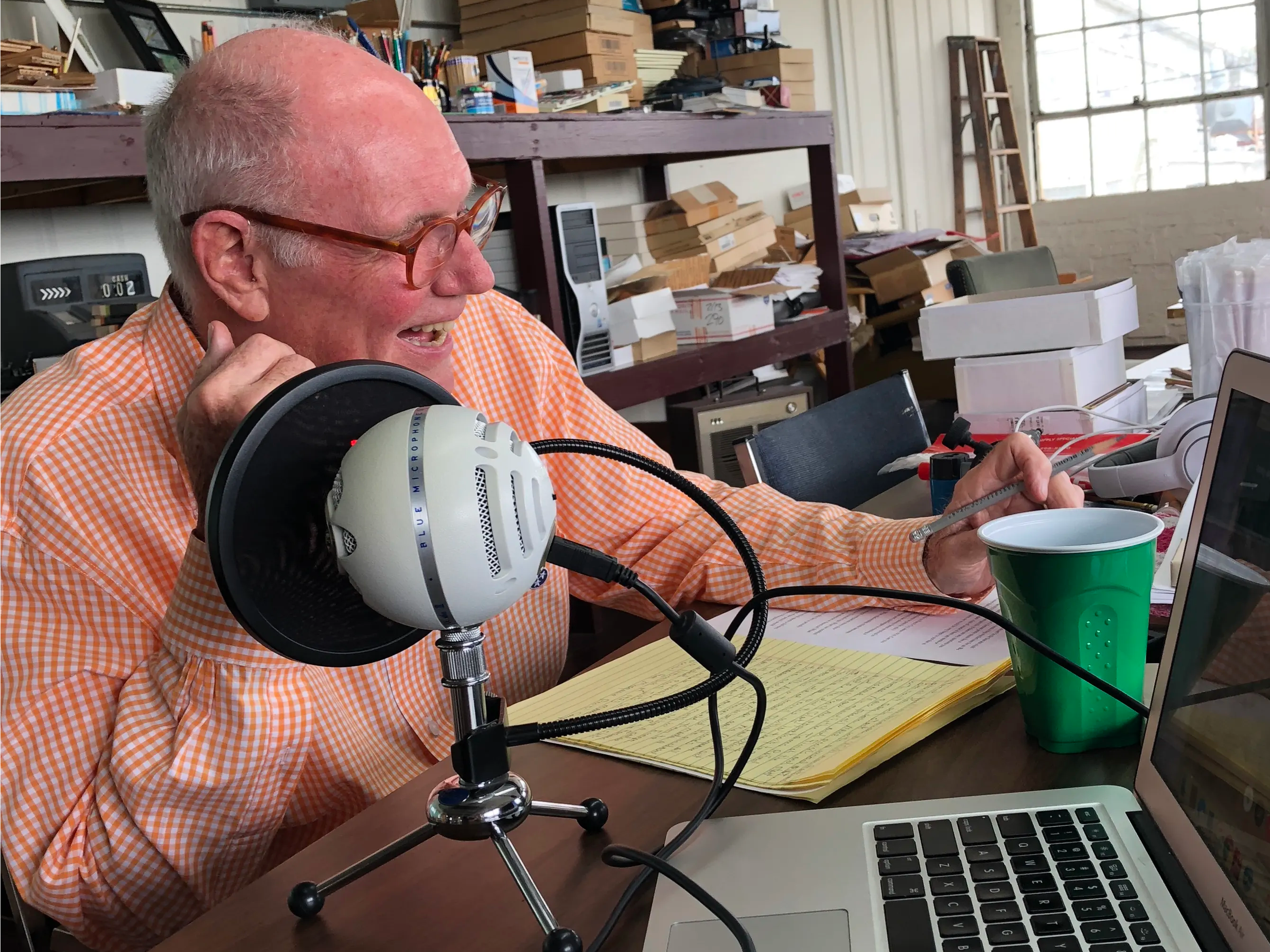 The salvaged slats for the Single Barrel were in pretty rough shape after an estimated 80 years of being in storage. We had a team of folks sort through the bins and pull as many salvageable pencil slats as we could.

The next big test was if they could be shaped in our wood department, especially in the groover. How would the wood hold up after more than 80 years? The slats passed the test, but with that first run we were holding our breath and crossing our fingers at the same time!

Select images and video from the slats moving through initial testing. 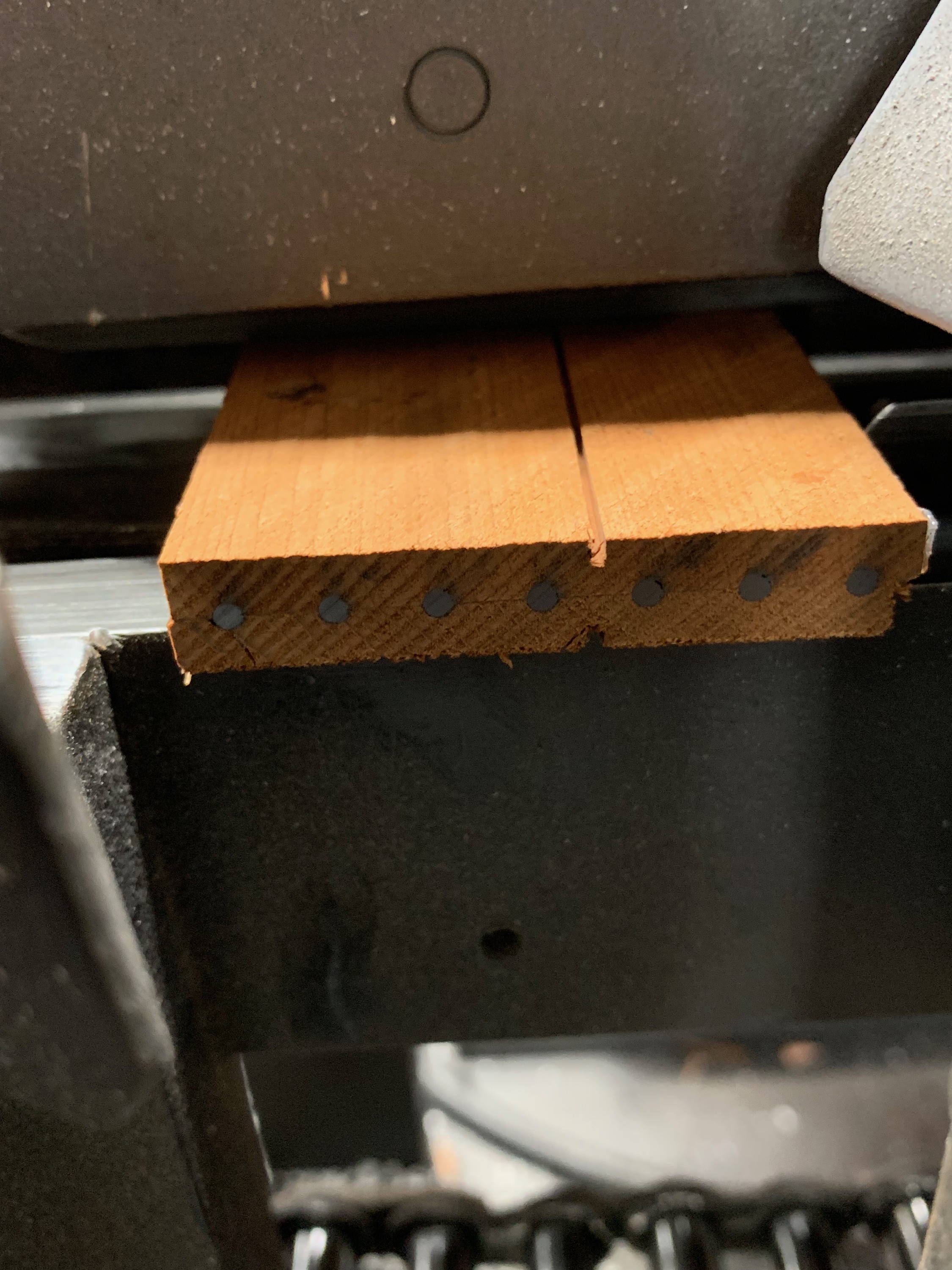 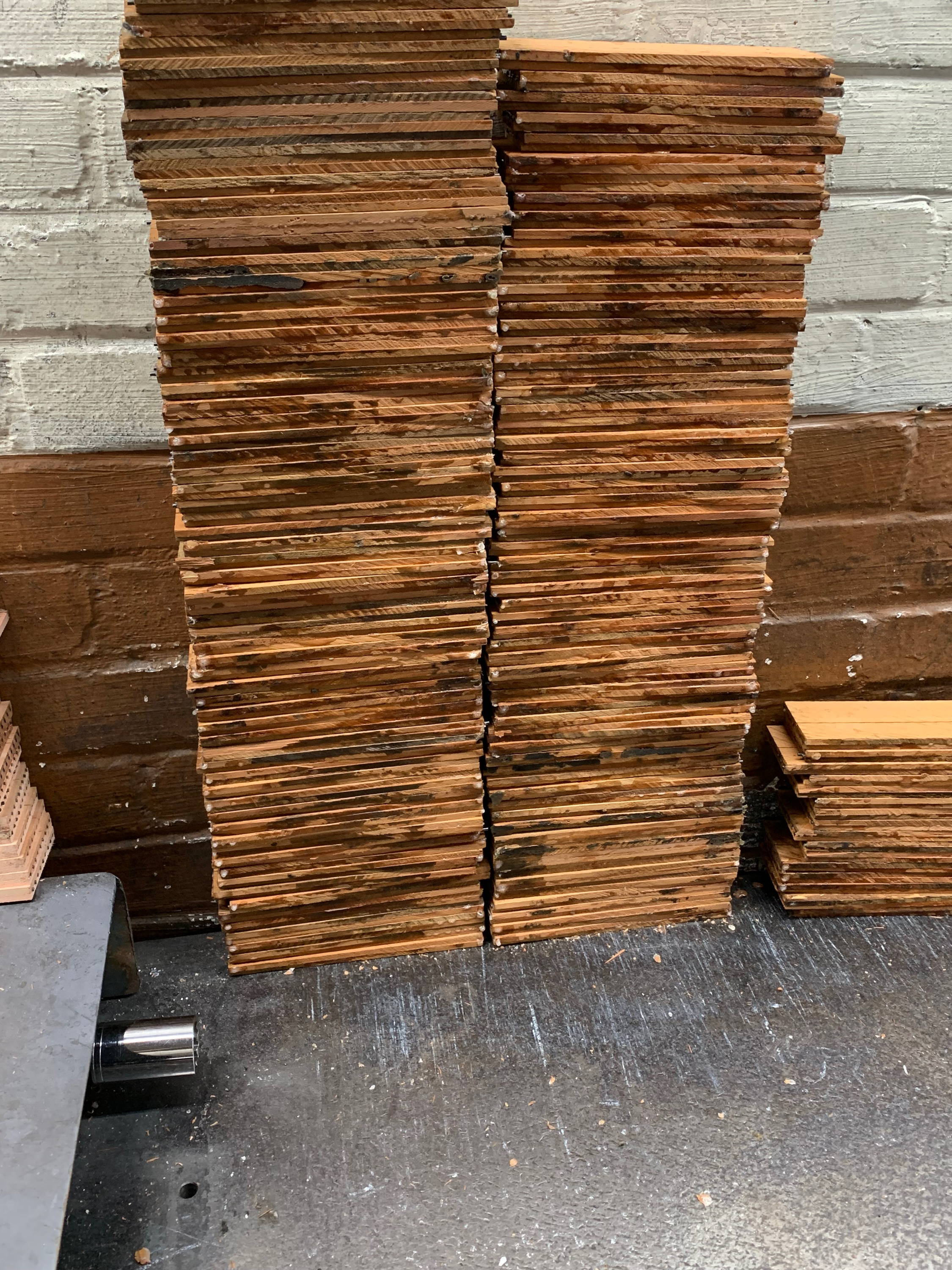 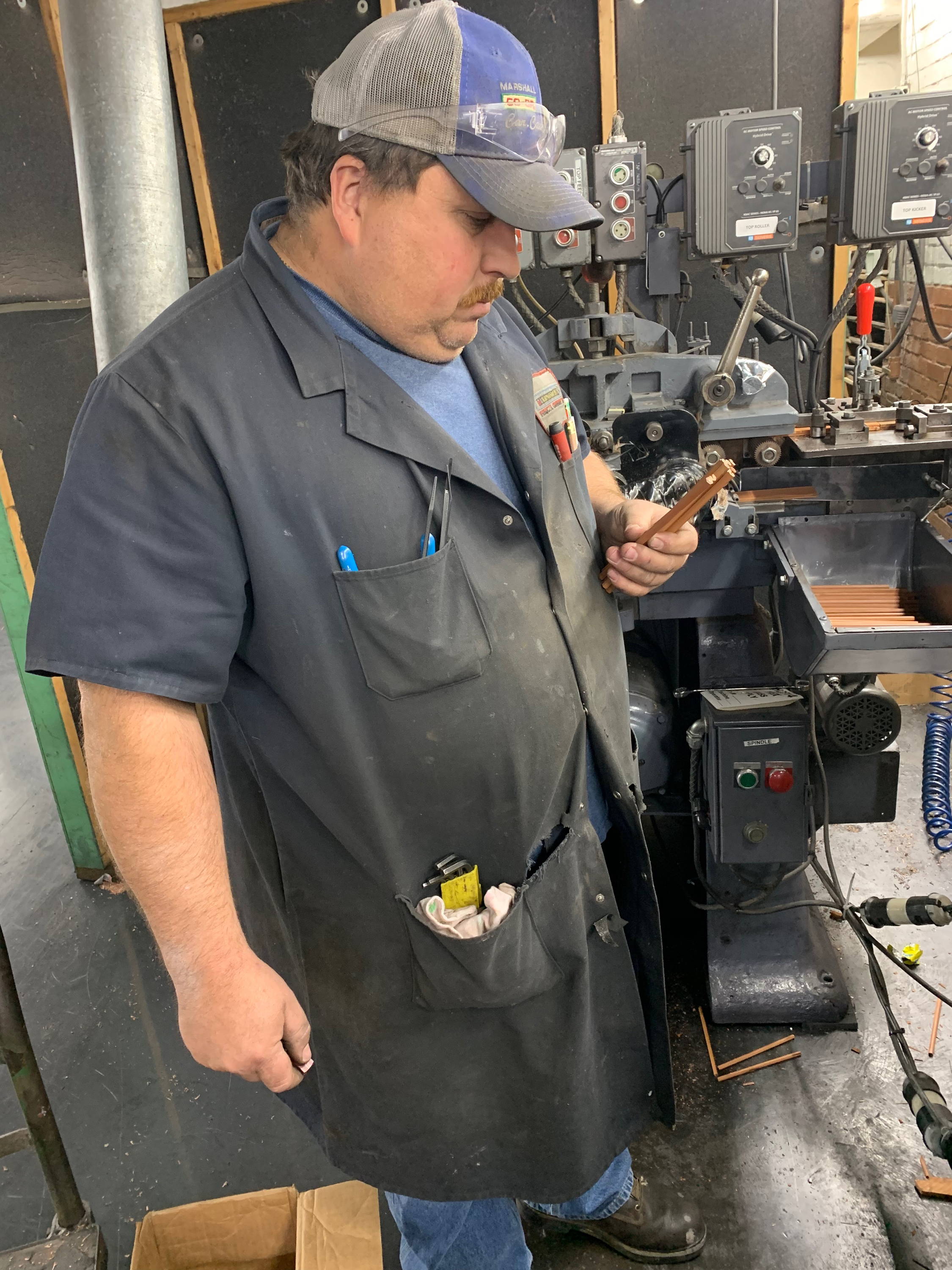 For the core, we went with a premium Japanese HB core. This gives the pencil a gorgeous smooth feel. This core is a long-time favorite of Henry’s, and we wanted to be sure we put a premium option in this limited-run collector’s item.

You may notice some of the cores aren’t perfectly centered. This was due to inconsistencies from the salvaged slats. If the slats aren’t perfectly uniform, it’s hard to keep the cores centered when we run them through the machines. We had an expert running the core laydown, so we did our best to keep this issue to a minimum. If your core is off, this shouldn’t impact your ability to sharpen and enjoy the pencil. 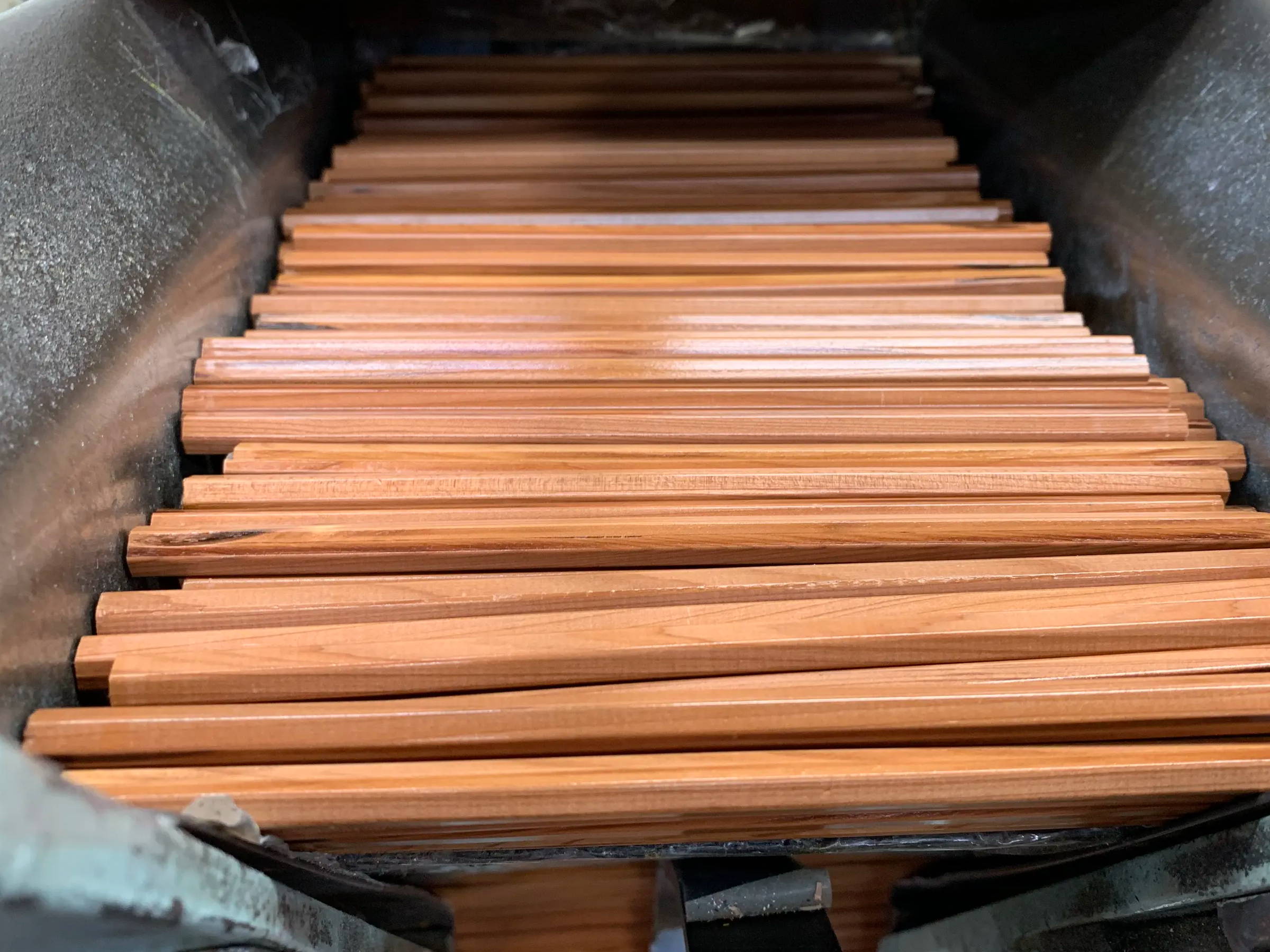 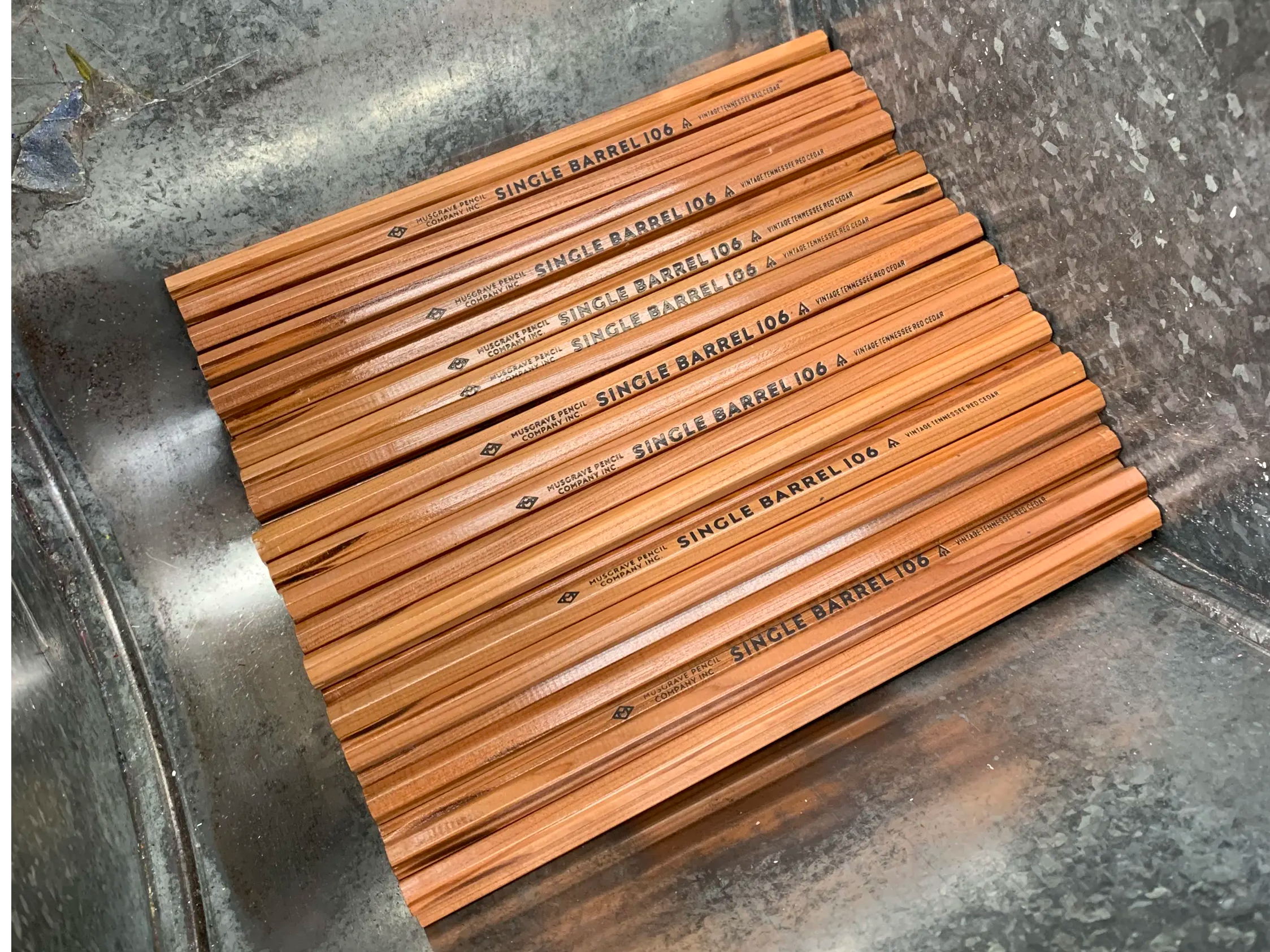 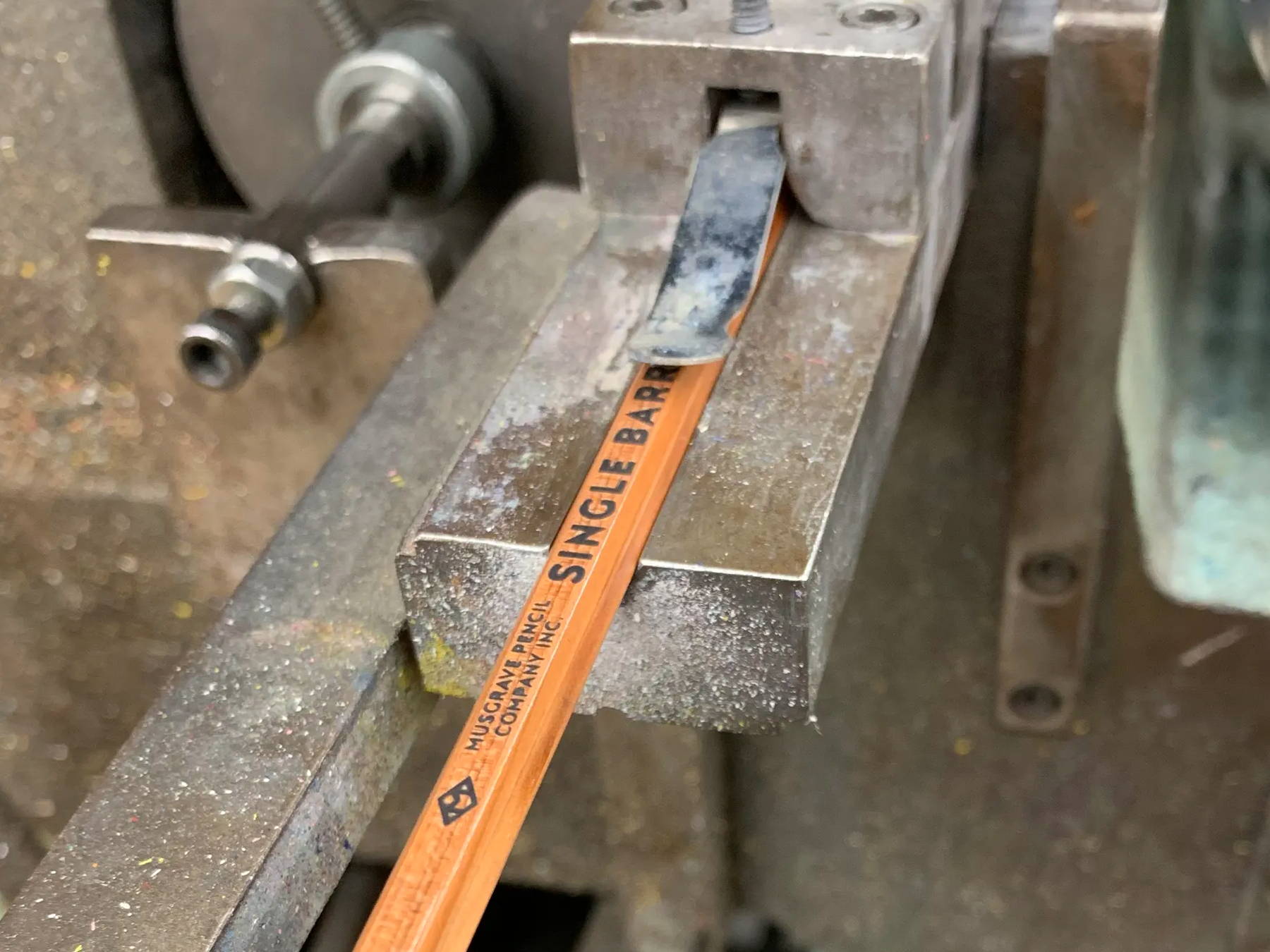 Meanwhile, we started playing with various names and designs. Henry wanted the pencil to give a nod to the conversation with Johnny and Andy, so we made the pencil number “106” to mark the 106th Erasable Podcast episode where the idea took flight. The Single Barrel is a nod to our Tennessee roots and Tennessee Whiskey:

Single barrel whiskey (or single cask whiskey) is a premium class of whiskey in which each bottle comes from an individual aging barrel, instead of coming from blending together the contents of various barrels to provide uniformity of color and taste. (Source)

While it wasn’t exactly a barrel, it was one big batch of old slats!

The imprint is a simple, clean font that we use throughout our branding. The graphic is a small Tennessee Red Cedar Tree with a “T” in the trunk. Because of the texture of the wood and the nuances of the grain, we kept the imprint simple, clean, and easily readable in a matte black.

We did a test run of the imprint and end cap on blank, basswood pencils. This way we could adjust anything without using up our precious vintage pencil slats. The light-colored wood and black imprint on the test run was a stark contrast, which had us a little nervous. We stuck with the black and crossed our fingers that it’d look better on the dark wood. 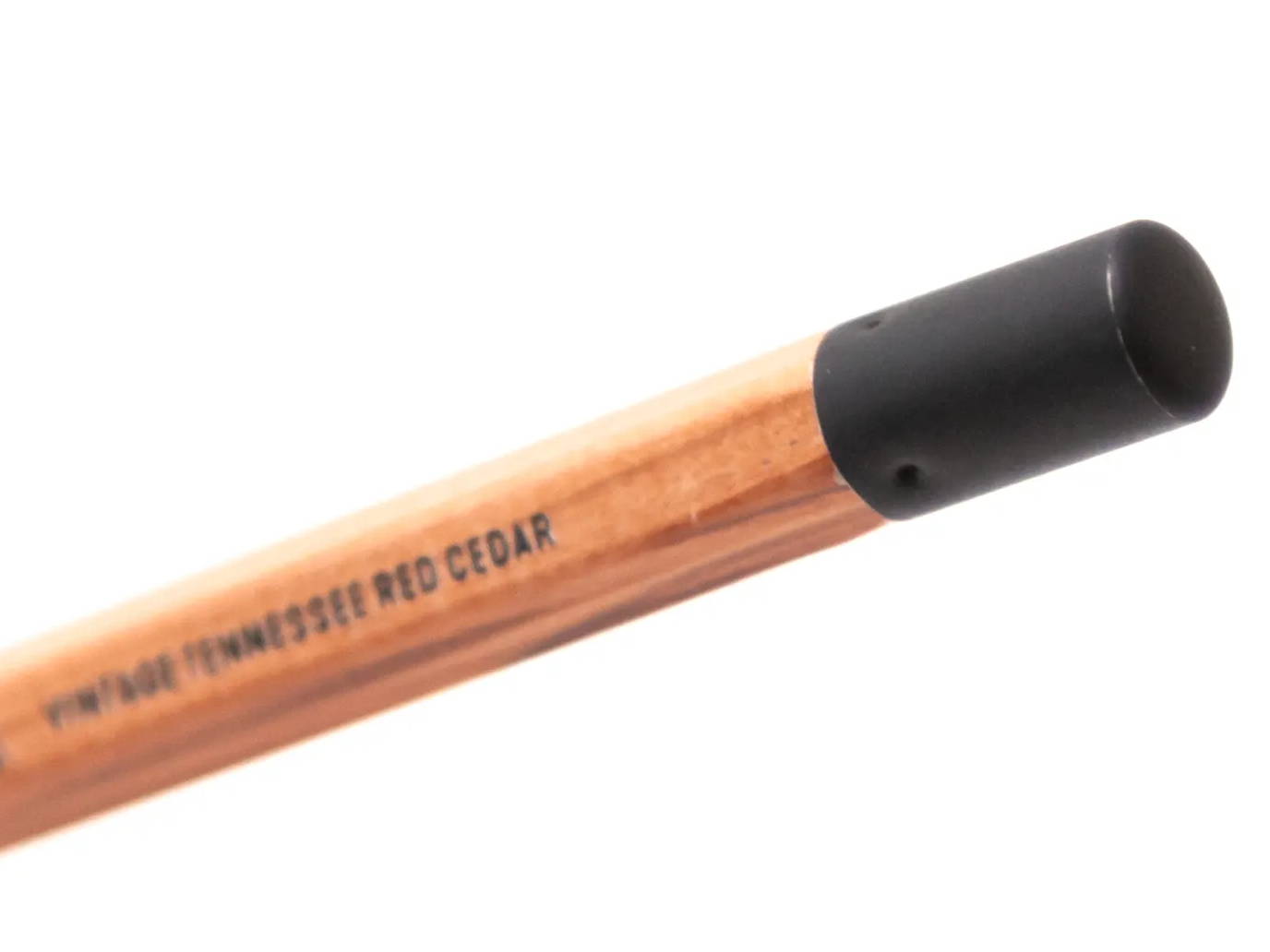 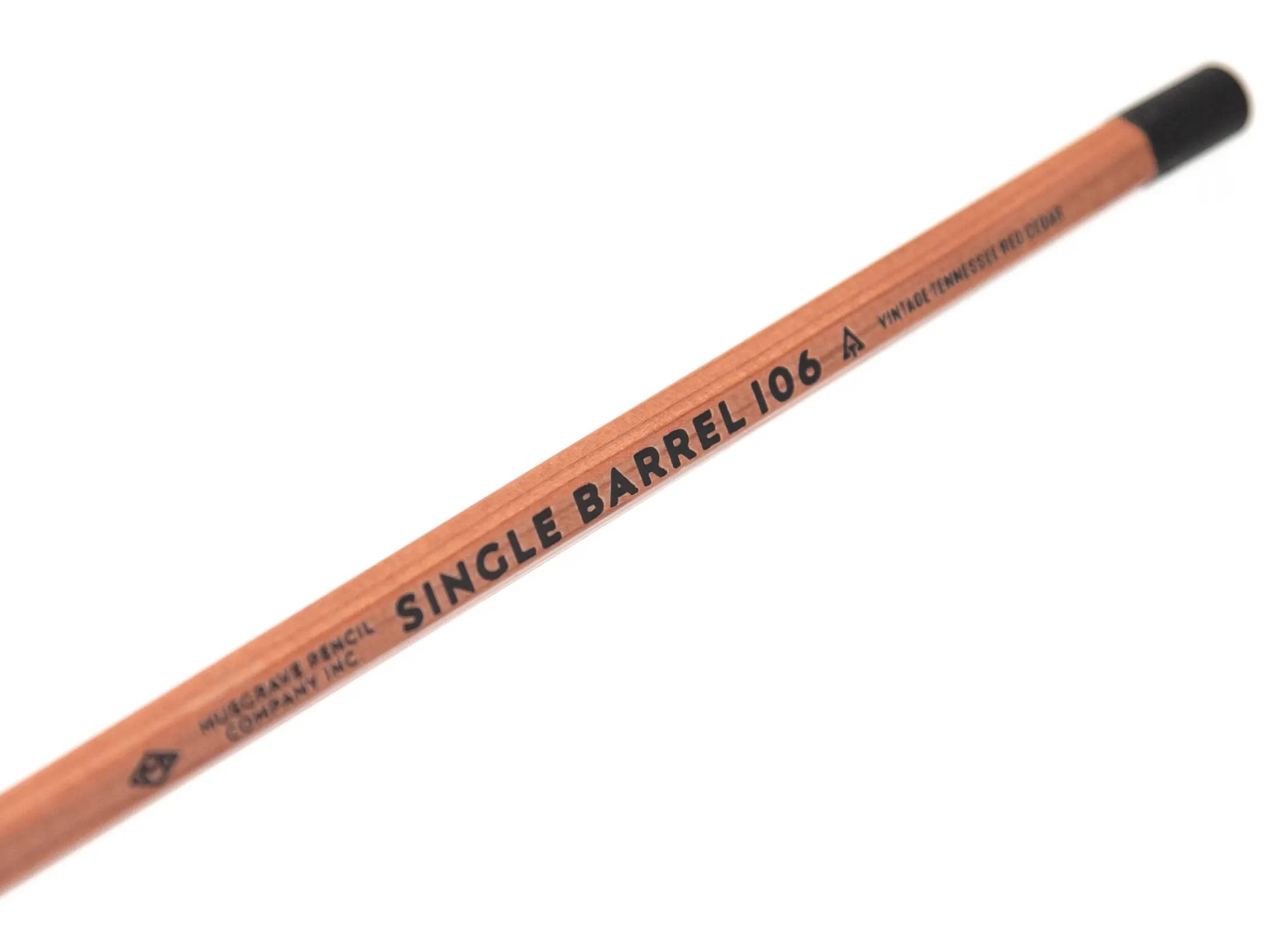 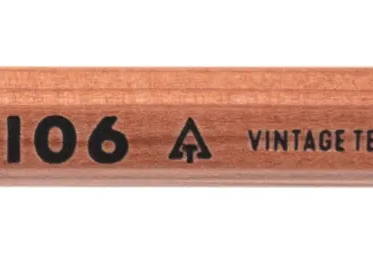 As you can see from the final product, sticking with the matte black looked fantastic! The wood was nice and dark, which made the black imprint feel more subtle. The pencils themselves have imperfections from the aged wood and interesting grain. You may even notice on some of your pencils a slight warp from end-to-end. (Roll it on a flat desk to see if that’s you!) This is the nature of the Red Cedar Wood and how it dries over time. It won’t impact the use or the value of the pencil. In fact, we love how each pencil has its own look and feel. The imperfections should be embraced.

Because we felt there would be as many collectors as there would be active users of the pencil, we decided to go with a simple matte black end cap. This would give the pencil some balance, but we wouldn’t have to worry about an eraser that may dry out over time.

The video featured here shows the pencils moving through our tipping machines.

We packaged them in one- and two-pack sleeves, which have an elegant gold foil on brown kraft paper. We condensed the amazing, true story of these slats on the back:

For a factory that has made a billion pencils during our 100-year history, we’re sitting on a very small batch of these Single Barrels. Collect one (or two!) today and take away a small slice of American pencil history with you! Watch the full making of below! 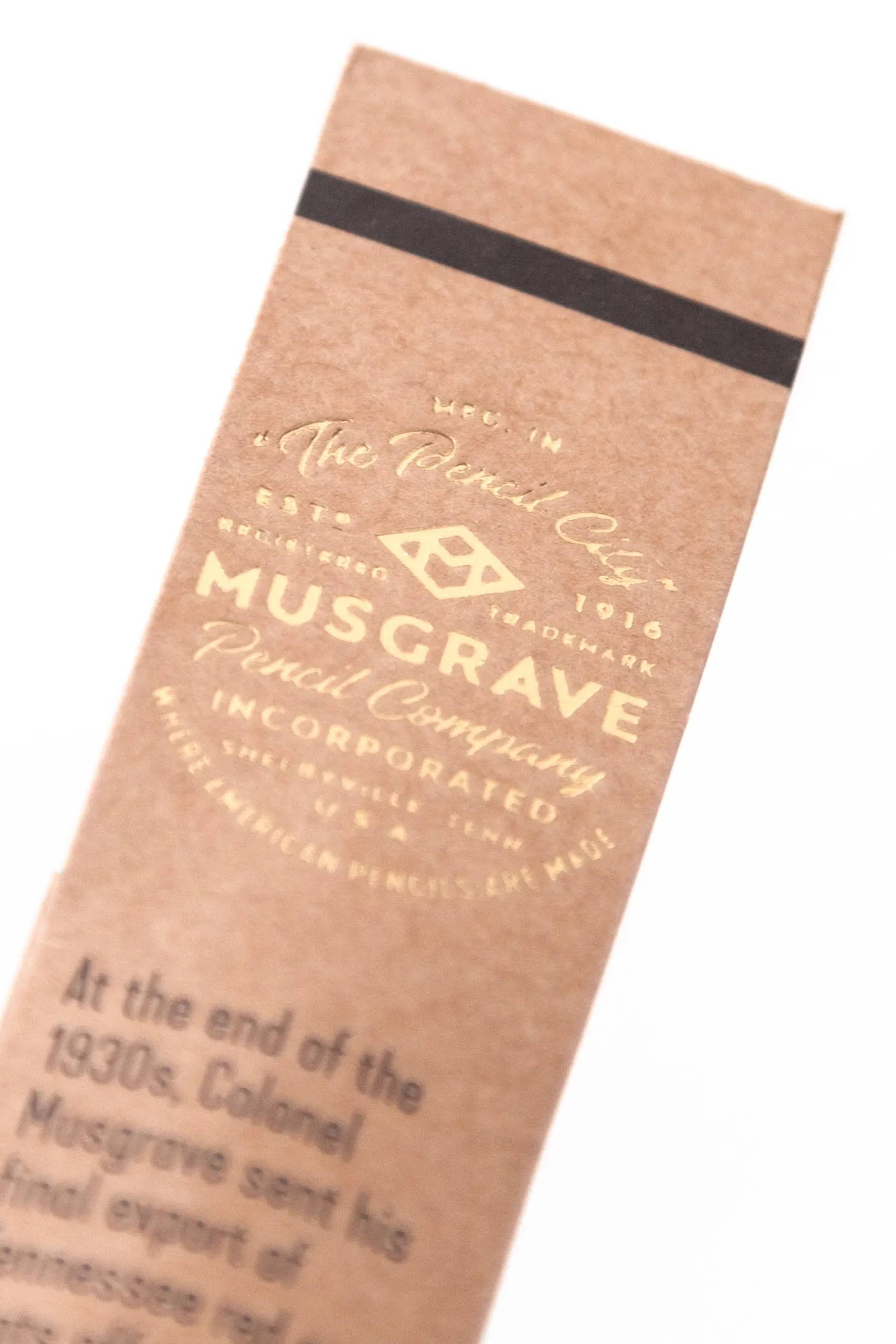 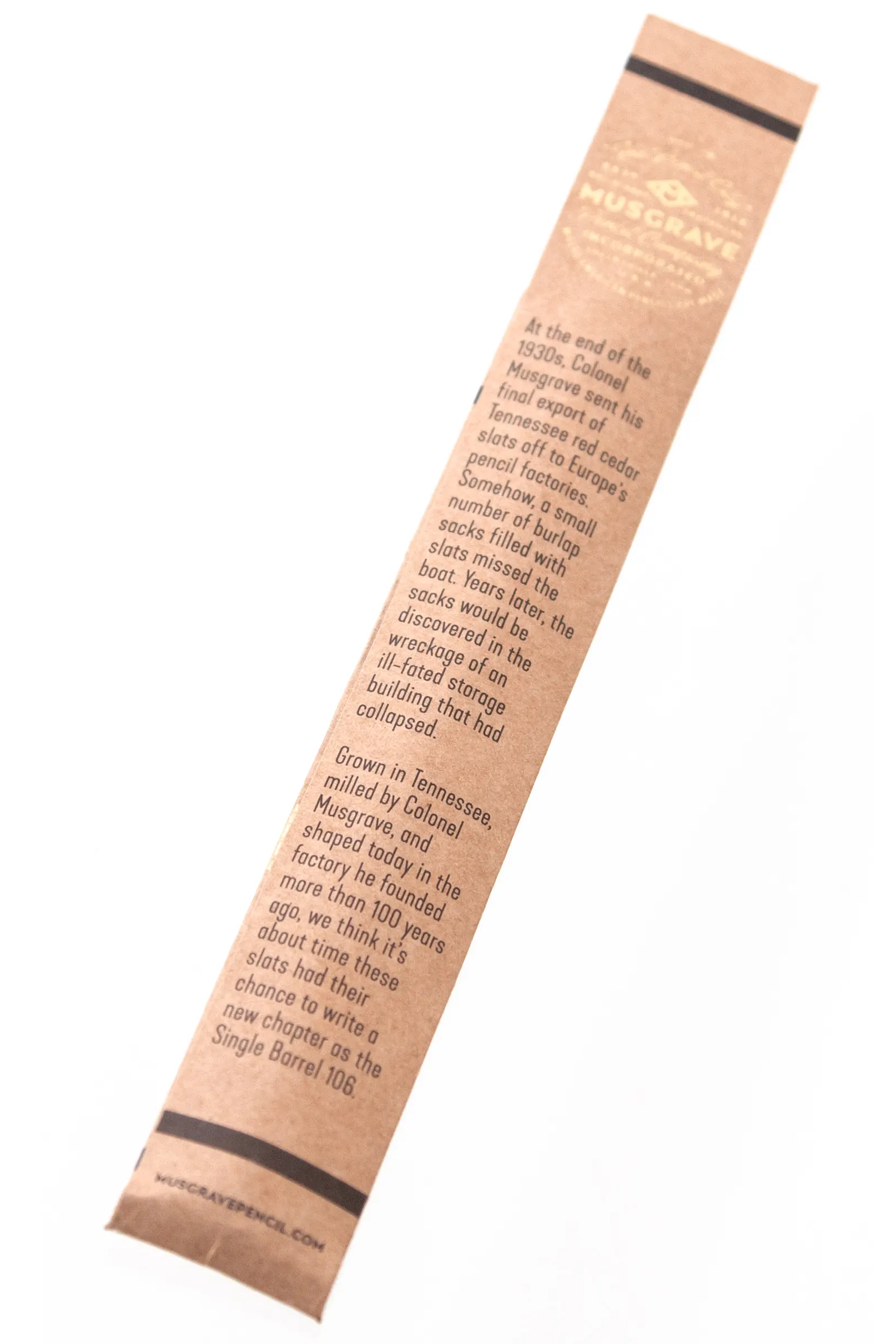 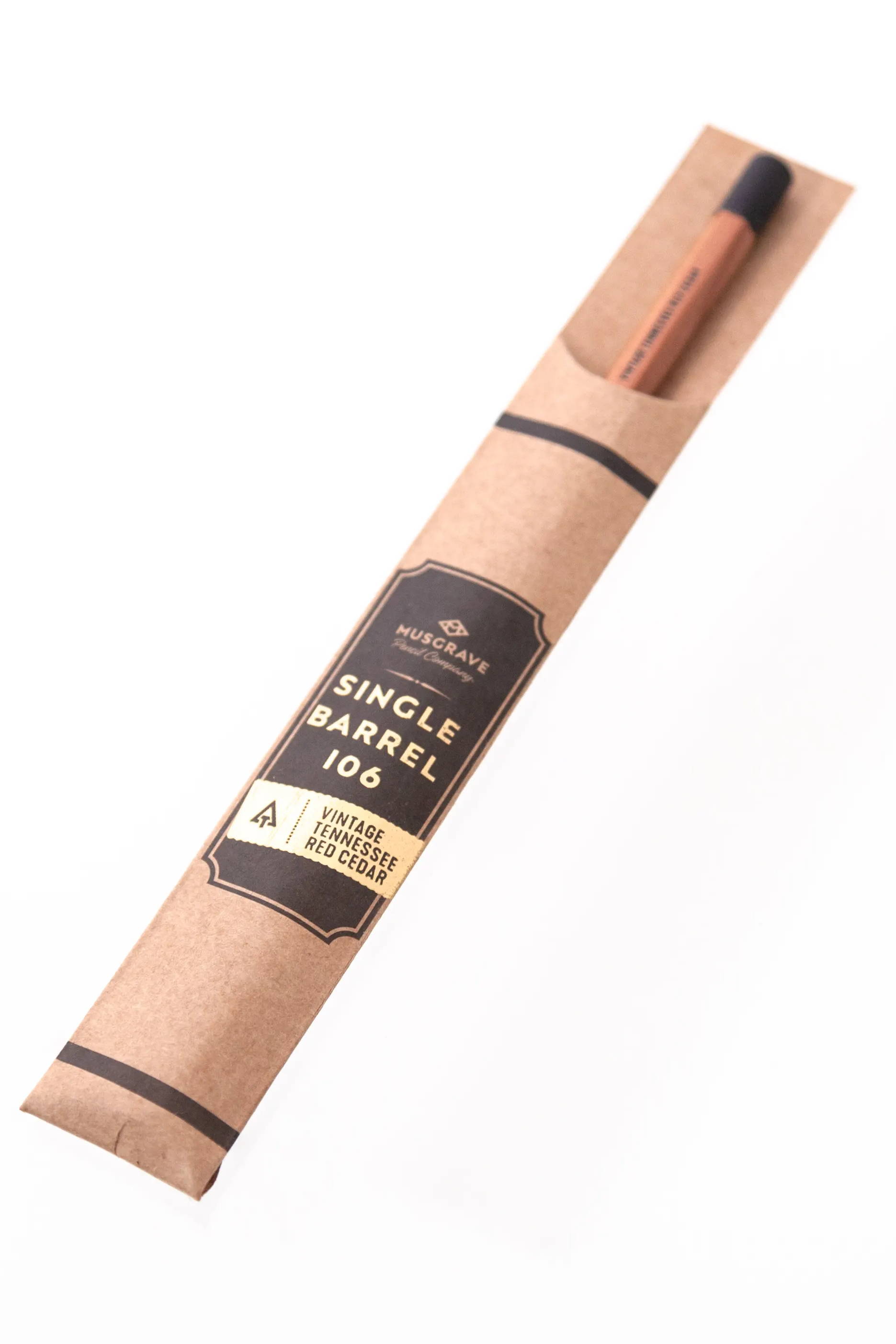